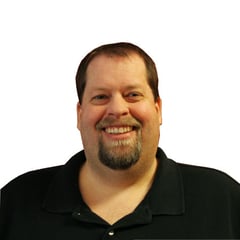 As the Development Services Lead at Algorithm, Jerry is responsible for leveraging ERP and 3rd-party solutions/add-ons to customize and enhance the overall functionality and user experience of Algorithm’s clients’ installations.

The range is from simple process automation to complex integration with other in-house systems as well as custom software solutions.

In 1996 Jerry was hired at a leading ERP provider as the first software developer hired into their IT department – in a company full of software developers.  He focused on developing web-based solutions for the sales channel and eventually developed their first  offerings.

After his initial years, Jerry has had several  positions developing intranet and extranet applications, focusing primarily on Microsoft technologies, such as C#, ASP.Net  Transact-SQL.  From 2008 to 2014, he was on the other side of the spectrum working at a company that used ERP as its core financial system which was fully integrated into an in-house software solution.

Jerry co-authored a book on C++ development with his twin brother.  He claims to lack the dexterity for modern video games, so he likes to collect retro games.  In his spare time he also writes games for vintage video game consoles.  He doesn’t like cheese.  All cheeses.  Well, except maybe some Mozzarella, but he has been known to order pizza without cheese.

describe your experience at Algorithm. When and why did you become involved?

Algorithm is interestingly different than any other place I’ve worked in my professional career. In my previous development roles, the goals were always focused on the company. Now, with Algorithm, it’s the same, but who fills the “company” role is different – it’s our customers.

I knew of Algorithm from a previous century, and I knew some old coworkers were still there [here], and as chance would have it, an email blast hit my inbox one day where I read that Algorithm was looking for some “application consultants”. I wasn’t exactly sure what that meant, so I contacted one of those old friends to get some insight. Next thing I know, I’m there [here].

Mike realized how spectacular I am and that I offered a different kind of skillset and it’s been one complex development challenge to the next ever since.

How do you maintain a work/life balance?

I learned a long time ago that you just need to leave work at work.   There’s nothing like pulling all-nighters to get a project done and then come in to see that most everyone that was supposed to be in the review meeting decided to go play golf instead.

Sure, there’s going to be the occasional late night, but if you make a practice neglecting your home life by putting in a lot of those late nights, you’ll become perfect at it.

What is your favorite aspect of living in columbus?

what is your greatest challenge that you have overcome?

I feel it’s yet to come.

What book have you always wanted to read but never got around to it?

I lifted this idea from a friend: reading the books on Time’s 100 top books of all time. I started reading from the bottom of the list and quickly realized that a lot of the Top 100 contain multiple volumes.

It’s more like 130. But there are some books on that list that I always wanted to read, but am thankful that I haven’t gotten to. I hear Ulysses is a pain to get through, much like trying to make sense of some of Dennis Miller’s jokes.

what is the last thing you took a picture of?

All vanity aside, my truck. I had it detailed and it looked awesome.

how do you survive in a cheese-less world and what is one food that you do like that might surprise us?

Living without cheese is actually quite easy as long as you don’t want most things on just about any menu anywhere. Might as well throw in there that I don’t like mayo, ranch dressing, sour cream, or other heavy creams too. Well, I do like pizza as long as it’s not too cheesy. I’ve been known to order pizza without cheese.

I’m not sure what would be a surprising food choice as I honestly don’t care for crazy cuisines – never much had any desire to eat a chocolate covered cricket or a barbequed scorpion, so you won’t catch me hanging out with Andew Zimmern.  Unless you consider a hot dog surprising?